Electricity plays an important role in helping people lead a civilized life, and copper is highly valued and widely used in this area. Only metals with fine conductivity and thermal properties can be used in incandescent bulbs, electric wires, wiring devices (sockets, plugs, and switches), and measuring devices. Copper is indispensable to conveying the advantages of electricity throughout the world.

The electronics industry, linking vacuum tubes, transistors and IC, is the fastest growing and most extensive of all industries. This industry can be characterized with four words - light, thin, simple, and small. Copper alloy materials have not only made significant contributions to making electronic products light, thin, simple, and small, but the same alloys are vital in making various circuit boards, switches, antennae, and all types of contact points. Copper is also used in the major parts of goods such as refrigerators, microwave ovens, TV, VTR, air conditioners, and acoustic devices. Every button uses copper, a fact that underscores how much copper has contributed to the advancement of modern civilization.

The material for making leadframes in semiconductors is a sophisticated special copper alloy produced by adding small amounts of other metals. It is an ultra-modern, specialized copper alloy material that has to fulfill the three requirements: high strength, fine elongation rate and high conductivity.

The materials called CDA194 and CDA195, manufactured by the U.S., once prevailed in the global semiconductor market. With new materials developed by Poongsan entering the high-tech market, Korea demonstrated the competitive viability of its technology.

Automobiles, electric trains, ships and aircrafts are composed of numerous parts and electronic devices. For instance, on average about 13 kg of copper and copper alloy parts go into a single passenger car. The radiator that cools the engine system is a major element of a car, requiring thermal conductivity and corrosion resistance due to its frequent contact with water. Therefore, it is absolutely necessary to use copper plates in such parts.

Copper is also used in various parts and decorative elements of electric trains, which are an ever-so-popular means of land transportation in many cities around the world. Ships are likened to moving buildings, and. The different types of piping required for water supply, hot water supply, and cooling/heating functions are key to the performance of any ship. Seawater resistance is essential.

Copper is often used in aircrafts to support its complicated functions. Different cables, hydraulic pipes, and switch contact points require materials light in weight, durable, highly resistant to corrosion, and flexible enough to endure vibrations; Copper is the material that fulfills all such requirements, and more.

Only limited materials may be used in power plants or desalinating facilities (facilities that convert sea water into drinking water). This is because these facilities have intricate requirements such as high levels of corrosion resistance, seawater resistance, hygiene, strength and high-temperature resistance. Cupro-nickel (an alloy of copper and nickel) and Al-bronze (an alloy of bronze and aluminum) are materials that meet such conditions, and as such are widely used around the world.

Poongsan Corporation exported 12,000 tons of cupro-nickel pipes to Saudi Arabia in the construction of the country's Al-Shoaiba desalination plant, which today is one of the largest fossil fuel-fired power stations in the world.

Copper products are even more widely used in construction - from routine applications in residential housing to grander projects, such as. Waterproofing in dam construction.

Copper is an ideal piping material in view of corrosion resistance, hygiene, and economical aspects not only for heating coils in the "ondol" floor heating system, but also for waterworks, water supply, hot water supply, cooling and heating, gas, fire extinguishing, and sewage drainage piping.

Copper roofing material is more widely used in the U.S., Europe and Japan due to its semi-permanent life expectancy and its excellent decorative design. It is durable enough to withstand ever-changing weather conditions, especially in the urban industrial area where atmosphereic acidification is common.

Employing copper as roofing material for culturally important buildings such as the National Assembly, the National Museum of Korea, religious temples and even general housing is on the rise. Poongsan reproduced the traditional Korean roofing style in the Independence Hall and temples across the country in accordance with the standards specified by the Office of Cultural Properties, thereby opening a pround, new chapter in Korea's roofing culture.

The life expectancy of paper money is roughly two years at best. The torn and worn bills have to be scrapped, wasting a great deal of money spent in issuing new bills.

Coins, on the other hand, may be used continuously and cannot be collected to be reused.

Even these days when credit cards, checks and high denomination bills are becoming more common, the demand for coins is continuously growing due to its role as a supplementary currency and the increasing the number of vending machines.

Coins change color depending on the alloy ingredient of copper. The coins used in Korea, denominations of 500 won and 100 won are made of cupro-nickel (alloy of copper, zinc, and nickel). In fact, 70percent of all conin distributed in the world use this material.

Why? First, copper alloy materials do not corrode easily and have a long distribution life. Second, the materials can be collected and reused. Third, coins pass through many hands and require hygiene. Copper allows the surface of the coins to be free of germs thanks to copper's unique anti-microbial properties.

Copper has superior hygienic quality due to its sterilizing properties, making it useful in food, medical- and hygiene-related industries.

And when it comes to the brewing industry, the successful fermentation and distillation of makgeolri (unrefined rice wine), wine, beer, and whisky all rely on the properties best exemplified by copper.

In the pharmaceutical industry, vitamin tablets are made using copper. Copper kilns are used because of its superior thermal conductivity and corrosion resistance.

Arts and other areas

Copper is an essential metal used in the arts-from bronze Buddha images, Buddhist temple bells representing the ancient arts, to the modern sculptures and traditional Korean instruments like the jing (gong), the bara (drum), and modern wind instruments such as trumpets and pipe organs as found at the Sejong Center.

Such materials must be easy to mold and process as well as aesthetically pleasing. When making musical instruments, only few metals can meet the requirements of achieving pure tones. Copper is one. In addition cooper has also been widely utilized as furniture decorations, locks, medical devices, and ornaments.

All told, a credible argument could be made that, without copper, modern civilization could not have advance. 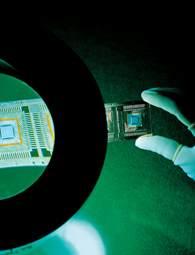